The Frostweed got introduced to the World of Warcraft for the expansion, Warlord of Draenor and the character requires a skill level of around 550 to maximise their effort when farming Frostweed. It has the same icon as the Icethorn from the Wrath of the Lich King expansion. It can be obtained by combining ten Broken Frostweed Stems together to form one Frostweed. Frostweed are usually found in cold areas such as Frostfire Ridge or near water like the lake in Shadowmoon Valley. Frostweed is a light blue herb and should be spotted quite easily depending on the terrain as it doesn’t blend into the background.

See below for maps and routes for where to farm Frostweed in World of Warcraft: Warlords of Draenor. 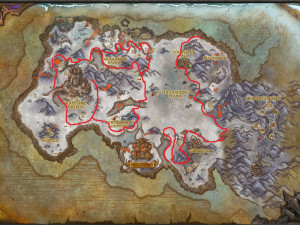